About three weeks ago (on the evening of April 14), the anti-western militant group Boko Haram (whose name literally means Western Education is sinful) stormed an all-girls boarding school in the Chibok region of Nigeria and kidnapped 234 female students.

A few days ago, a video surfaced in which Boko Haram leader Abubakar Shekau announced that he plans to sell off the girls as wives, saying:

“God instructed me to sell them, they are his properties and I will carry out his instruction.”

There was also a report last week that some of the girls were being sold as brides to their kidnappers for just $12 a piece.

Although Nigerian President Goodluck Jonathon has made speeches assuring that the government will find the girls, it doesn’t seem that much is actually being done, and Nigerians have very little confidence in the government finding the girls.

Last week, Naomi Mutah, a representative of the Chibok community from which the girls were taken, organized a protest outside of the NIgerian capital of Abuja. The protestors criticized the government for not doing enough to find the girls and fight Boko Haram. 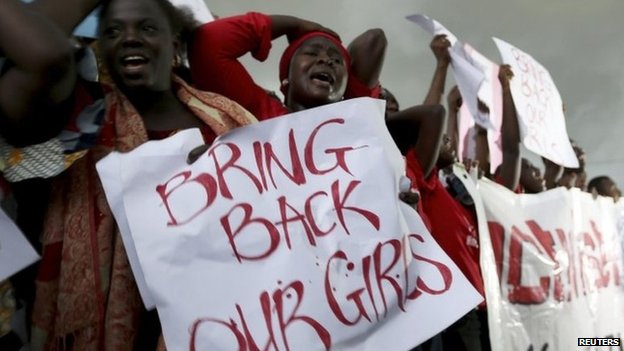 Nigerian women protest the government’s lack of action in front of the capital in Abuja (Photo: Reuters)

Earlier today, the BBC reported that Nigeria’s First Lady Patience Jonathon called a meeting for those affected by the tragedy- the Chibok community sent Ms. Mutah to represent them. Following the meeting, Ms. Mutah was taken to a police station and detained.

The first lady is a very powerful political figure in Nigeria and apparently felt slighted that the mothers of the abducted girls had sent Ms. Mutah to the meeting. Pogo Bitrus, another community leader from Chibok, told the BBC that he had been to the police station where Mutah was reportedly being held, but found no written records of her being there. He said he hoped the first lady would soon, “realize her mistake.”

The AP talked to another community leader, Saratu Angus Ndirpaya, who was at the meetings. She said that the first lady had accused the activists of supporting Boko Haram, and had even accused them of completely fabricating the abductions to give the government a bad name.

Read more from the BBC here.