In 1772, French nobleman and chemist Antoine Lavoisier used a lens to concentrate the sun (magnifying-glass style) on a diamond in an atmosphere of oxygen. The diamond released only carbon dioxide (CO2), proving that diamonds were made up only of carbon.

Then in 1779, English chemist Smithson Tennant further bolstered the findings by burning both graphite (which is also composed completely of carbon) and diamonds, and showing that the amount of gas produced by the two minerals matched the chemical equivalence he had established for them. Diamond (left) has a complex geometric crystal structure, while graphite (right) is made of more simple haxagonal sheets

From that point on, the race to manufacture a synthetic diamond was on. It become a sort of holy grail for both scientists and scam artists alike at the time.

Individuals claimed to have successfully manufactured diamonds a number of times over the next century and a half, but none of their claims proved to be valid or their experiments reproducible.

Hall was born in Ogden, Utah in October of 1919. He was a bright kid: his hero was Thomas Edison and he announced in the fourth grade that he would one day work for General Electric. 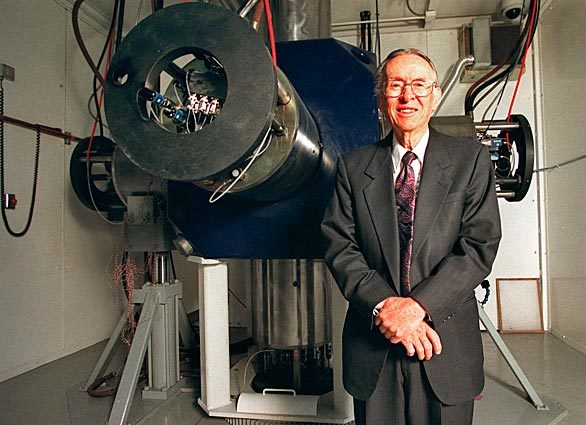 A recent picture of Hall

After spending two years at Weber College, he got his bachelors and masters at the University of Utah in Salt Lake City.

He then spent two years in the Navy before heading back to the University of Utah to get his Ph. D. in physical chemistry. He finished the graduate program in 1948.

Just two months later, he realized his childhood dream: GE offered him a position in their Research Lab in New York, working on “Project Superpressure”, which aimed to manufacture a synthetic diamond.

When Hall arrived at the lab in New York, GE was in the process of buying a massive $125,000 press that was capable of generating pressures up to 1.6 million pounds per square inch in a confined space. Hall wasn’t impressed. He had previously built his own pressure chamber from a salvaged 35-year-old Watson-Stillman press, and thought he could create a better machine with only an additional $1,000.

Unfortunately, GE wasn’t interested. They refused to give him the funds or to even let him use their state-of-the-art machine shop to build it.

But Hall wasn’t going to be stopped. He got a friend and colleague to let him use the machine shop after hours and got a former supervisor to persuade the company to purchase the expensive carboloy (tungsten carbide dispersed in cobalt) that Hall needed to build the chamber.

On December 16, 1954, almost all of the researchers had left for Christmas break. Hall, on the other hand, was in the lab by himself, preparing for final testing of his new pressure chamber. He had  experienced a number of false starts, but was stubborn in his pursuit.

He later described the moment when he unsealed his apparatus:

“My hands began to tremble; my heart beat rapidly; my knees weakened and no longer gave support. My eyes had caught the flashing light from dozens of tiny . . . crystals.”

Hall tried the test a couple more times, and got the same result every time. He then had a colleague, Hugh H. Woodbury, reproduce the experiment. He too, created diamonds.

Hall reported his discovery to GE officials. They initially thought his findings were exaggerated, but after being shown the experiment in front of them (with Hall outside the building), they were convinced.

On February 14, 1955, GE announced that it had manufactured the first synthetic diamonds. Media outlets around the world trumpeted it on the front page.

For his efforts, they gave Hall a $10 savings bond. “Big deal,” he said later.

The diamonds weren’t large enough or of high enough quality to be sold as jewelry, but since diamonds are one of the hardest minerals on earth, they were perfect for industrial applications, allowing us to cut and harvest minerals that had been impossible to collect before.

Upset by the lack of credit, Hall left GE for BYU shortly after the announcement. However, the work was so ground-breaking that the government slapped a secret label on Hall’s device, preventing him from using it in his research.

Still, Hall refused to be stopped. He designed a new apparatus, called the tetrahedral press, which was even better than the first one and circumvented all of the patents held by GE.

He published his work on the new pressure chamber in a popular scientific journal. The government responded by slapping another secret label on the new device.

However, the government lifted this second secret label a few months later, allowing Hall access to his invention. He and two other colleagues would later start MegaDiamond, which remains one of the largest synthetic diamond providers to this day.

Since the 1950s, advances in other technologies have improved Hall’s methods, and synthetic diamonds are now used in many electronic devices like laptops and cell phones.

The modern methods are able to create synthetic diamonds as large as 12 carats with much higher quality and clarity, allowing them to be sold for jewelry as well.

After his retirement, Hall became a tree farmer. He passed away at age 88 in July of 2008.