India has been at the forefront of the solar industry for the past few years now. They are currently in the process of building by far the world’s largest solar power plant, and newly elected Prime Minister Norendra Modi has announced a plan to bring electricity to every home by 2017, using solar power.

Now, India is taking another huge step in the development of their solar infrastructure.

The idea of floating solar panels is not a new one. India already has a number of solar installations floating on canals across the country. And just last year, Japan opened up its new Kagoshima Nanatsujima plant, a floating solar plant consisting of 290,000 solar panels floating off the coast of Kagoshima, a city at the southernmost point of Japan. 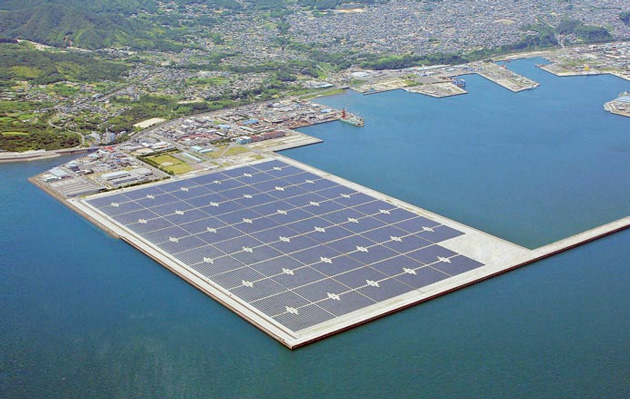 India’s new plant will be similar to the Japanese one, though slightly smaller. It will cover an area of  1.27 million square meters (about 0.5 square miles), and generate 50 MegaWatts of power.

For comparison, Kagoshima, which generates 70 MWs, is able to power 22,000 homes with a little extra power left over (which goes back into the grid).

Gon Choudhury, chairman of India’s Renewable Energy College, recently spoke with Gizmodo about the plans. He pointed out that the plant will have little environmental impact on the ecology of the body of water, and that the solar installation will also reduce evaporation, helping to conserve water during the hot summer.

He also pointed out that floating solar panels are more efficient than those on land:

“Solar panels installed on land, face reduction of yield as the ground heats up. When such panels are installed on a floating platform, the heating problem is solved to a great extent,”

Choudhury says. India hopes to complete the project by the end of the year.

Note: The feature image is of a floating solar installation in Okegawa, Japan.