I’m no saint. Just like everyone else, I get frustrated with people from time to time. If you catch me after a particularly maddening encounter, you may hear the words “ignorant”, “bigoted”, “close-minded”, and maybe even “asshole”.

But one word you will never hear me use to describe a person is “dumb”. The increasingly popular idea that the world is full of stupid people is a basic misunderstanding of what it means to be “smart”.

Real intelligence is simply the measure of a person’s curiosity.

As a child, I was deprived of video games and cable television (in hindsight, I’m eternally grateful for it). So, I explored outside, dug things up, made messes, did questionable “experiments” in the kitchen, and burned stuff every chance I got (what little boy isn’t a pyromaniac?).

I also asked a lot of questions. I mean a lot. Why is the sky blue? Why is rain wet? Why does grandma keep an extra set of teeth in a glass in her bathroom?

One day I guess my mom just got tired of trying to answer them all, so she took me on my first trip to the library. I’ll never forget what she said as we entered that temple of learning:

“The answer to every question you could ever have is in here.”

I was immediately hooked. From then on, when I wanted to know how something worked or why something was the way it was, I went to the library and found a book I could read about it.

I wasn’t critiquing the authors’ literary styles, or analyzing their sentence structure, or looking for deeper meanings. I was just enjoying the reading and relishing in my newly found power to find answers to every question.

That’s why today I have a wealth of relatively random facts that I can recall whenever necessary. It’s not because I was any smarter than any other kid my age, it’s just that I had parents who showed me a place where I could ask as many questions as I wanted and actually find the answers on my own.

Calling someone stupid also means you don’t understand how the brain works.

The average brain is made up of about 100 billion brain cells called neurons. Each of these neurons has the potential to connect to any of the others.

If you can remember your combinations and permutations unit in 7th grade math, you’ll know that the total number of possible connections that can be formed between 100 billion neurons is equal to 100 billion factorial:

So what’s the total number of possible connections? Well, I tried to do 100 billion factorial on five different online scientific calculators and they all gave me the same answer: infinity (the real answer is obviously not actually infinity, but it’s a number with about 25 billion zeroes).

Google calculator was having no part of that calculation

That’s right. There are virtually infinite ways in which our brain’s neurons can potentially connect to one another, and it’s the combination of these neural pathways that allows our brains to function.

When we are born, there are very few connections in our brain. This basically means that our potential is limitless.

An MRI scan of actress Fiona Shaw shows the major neural “highways” between different bunches of neurons in different regions of the brain. Click to enlarge

As we begin to get older, our brain realizes that certain abilities, like being able distinguish monkey faces as well as we distinguish human faces, aren’t really very useful. Consequently, those pathways erode away-the typical adult only maintains a few trillion pathways throughout their life.

I know the monkey example seemed a bit random, but it’s actually from a real study. In 2005, researchers demonstrated that six-month old infants could distinguish between the faces of different monkeys just as easily as they could between different human faces.

However, by the age of nine months old the toddlers’ brains had realized that the skill wasn’t useful, and most of them lost the ability. Only the babies who continued having to differentiate between the monkeys (ie. for whom the skill was still useful) retained the ability. 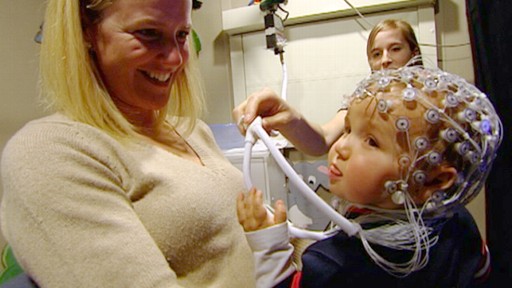 One of the babies who took part in the study

There is the potential for some extremely powerful, some would even say magical abilities within our brains. However, the brain’s number one priority is survival, so it limits things like creativity and imaginativeness to ensure that we can function well in society and provide for ourselves.

But sometimes, the part of the brain which holds back that dam of possibilities gets damaged, allowing glimmers of our superhuman potential to shine through.

That is the case with people suffering from savant syndrome. Savant syndrome occurs when a mental disability like autism damages the part of the brain that controls our basic functions.

Although those suffering from the condition usually lack the basic motor skills to tie their own shoes or dress themselves, the condition also liberates other parts of their brain, giving them some mind-blowing abilities:

A man who can read a book two pages at a time (one page with each eye) and remembers every detail about the 12,000+ books he’s read so far:

A man who flawlessly played Tchaikovsky’s Piano Concerto No. 1 after hearing it once. He was 16, never had any classical training, and had just learned to walk on his own a year earlier:

A man they call the human camera, who can recreate entire cityscapes, down to the number of windows in every building, after viewing it once:

The list goes on. The point here is that all of us have this amazing potential within our brains. There have even been studies done proving that we can tap into some of this potential by temporarily shutting off parts of our brain using electrodes.

When we are born, we all have the potential to be as smart as Stephen Hawking, or as funny as Richard Pryor, or as musical as Jimi Hendrix. But from that point on, who we become depends on the neural connections that are created by the environment we live in.

And not only does everyone have amazing potential, but everyone has something to teach you. Knowledge can be obtained from books or computers, but wisdom can only be obtained through experience.

The wisest guy I know

Every person in this world has a life experience unlike anyone else’s. We all gain perspective about the world from the lessons we learn throughout our lives, so there’s a nearly infinite amount of wisdom we can obtain from those around us, if we’re willing to look for it.

Our brains are naturally curious, but this curiosity must be protected and fed for it to achieve its potential. Remember, Einstein was dyslexic and mildly autistic as a child, and he ended up becoming arguably the greatest scientific mind of our times.

Calling someone dumb makes them scared to ask questions- it stunts their curiosity, thereby inhibiting their ability to find out the truth on their own.

So, every time you call someone dumb, you are actually the one making society less intelligent.