Home
In-Depth
Liberators or Terrorists? The Origins and History of Israel and Hamas

As the Israeli-Palestinian conflict rages on, much of the focus lately has been on Hamas.

Critics say the group is a terrorist organization that wants nothing but to wipe Israel off the face of the Earth. Supporters say Hamas, which represents the only organized Palestinian military force, is a coalition of freedom fighters and liberators defending the Palestinian people.

But where did the organization even come from? And how has is it become what it is today?

Thinking you can understand the current conflict by looking at only the past few years of its history is like thinking you understand calculus because you passed freshman algebra. Hopefully, this quick piece can be a pre-cal of sorts for people wanting to really understand the history between Israel and Palestine.

In 1917, Great Britain occupied Palestine during a period of British expansionism. Assisting in the conquest of Palestine was a Jewish military volunteer group known as the Jewish Legion.

This group was comprised primarily of Zionists, Jews who believed that it was God’s will for them to one day return to their ancient homeland (Mt. Zion is located in the heart of Jerusalem).

In 1920, Palestinian riots led to the formation of a Jewish militia known as the Haganah. The militia was formed by Jews who felt that Britain had no interest in confronting the Arab populations in the region who were expressing their disapproval for the ongoing British occupation.

Between 1919 and 1929, 100,000 more Jews migrated to Palestine. This led to an Arab revolt in the late 1930s, which prompted Britain to pass legislation limiting Jewish migration to the territory.

But World War II and the Holocaust displaced millions of Jews in Europe, and many of them sought a new life in the primarily Jewish British-held areas of Palestine.

Britain found itself in a conflict with the Haganah, who wanted to establish an independent Jewish state, while also trying to deal with the Arabs and Palestinians who were still upset that their traditional lands had been occupied in the first place.

So Britain basically gave up. They said they couldn’t solve any of the problems between the Jews and the Arab Palestinians and pulled out of the area in 1947.

Later that year, the UN passed UN Resolution 181, splitting up the Palestinian territory into separate Jewish and Palestinian states.

The resolution was signed without the agreement of the Palestinian Arabs in the region. The United States had promised the Palestinian Arabs that they would be consulted before any decision was reached, but that promise was broken. So as soon as the resolution was passed, fighting began, with Arab forces attacking Israeli territories that had formerly been part of Palestine before UN Resolution 181.

Israel won that war, thanks in part to weapons acquired secretly from western countries like the United States and France who were sympathetic to the Jewish cause but didn’t want to become publicly involved.

Not only did Israel hold onto its own territory, it also captured 50% of the territory that had been given to the Palestinians under the UN resolution. 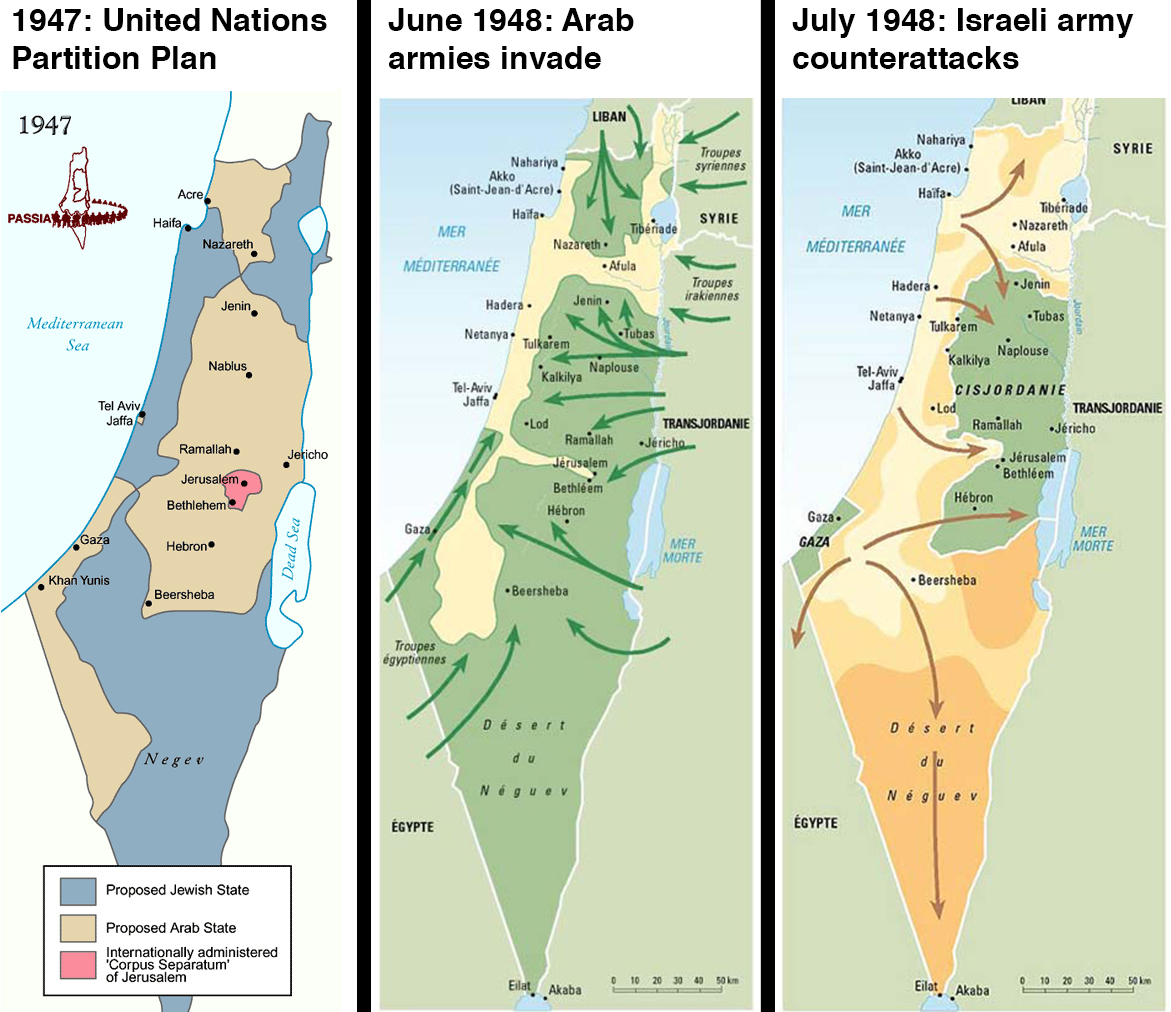 The change of territory following UN Resolution 181 and the resultant war. Click to enlarge

In 1964, a number of Arab countries sent representatives to Cairo for the Arab League Summit. The goal of the summit was to resolve inter-Arab conflicts in the region so that the Arab countries could unite in their struggle against what they saw as western imperialism and Israeli aggression.

It was at this summit that the idea for the Palestinian Liberation Organization, or PLO, was born. The stated goal of the PLO was to “liberate Palestine through armed struggle”.

Although the dominant religion in these Arab countries was Islam, the PLO was comprised mainly of secular Palestinian factions (the largest being the Fatah party), who were actually wary of the rise of Islamic extremism.

Historically, Palestinians have been a religiously tolerant people. For hundreds of years, Muslims, Jews and Christians alike lived peacefully together as fellow Palestinians. The PLO wanted to make sure that this tolerance was preserved.

In fact, the Islamic extremism which is now considered the backbone of Hamas was actually encouraged by Israel itself.

In 1967, Israel fought the Six-Day War against an Arab federation led by Egypt. At that time, the PLO was quickly becoming popular among Arabs in the region, and this worried Israel. So using PLO guerilla activity as a pretext, Israel took over the Palestinian territory of Gaza and began systematically hunting down members of the PLO and the Fatah party.

To combat the PLO’s secular influence in the region, Israel began encouraging Islamic activism in Palestine. One of the biggest beneficiaries of this Israeli policy was a man named Sheikh Ahmed Yassin, who was the head of the Muslim Brotherhood in Gaza at the time. 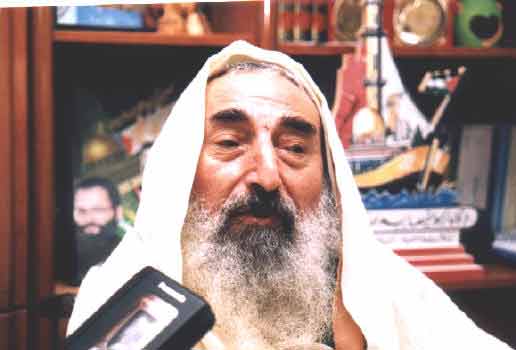 In 1973, Yassin established the Islamist group Mujama al-Islamiya. The organization was officially recognized as a charity by Israel in 1979.

Yassin used the organization to establish mosques and Islamic schools in Gaza, as well as a library. But Yitzhak Segev, an Israeli official who served as governor of Gaza in 1979, says that he had no illusions about Yassin’s real intentions.

Segev had personally witnessed an Islamist movement in Iran which eventually led to a military coup that toppled the democratically elected Prime Minister, Mohammad Mosaddegh in 1953. The coup cleared the way for the Shah of Iran (the country’s highest-ranking Muslim cleric) to take power. Men celebrating the military coup in the streets of Iran’s capital city of Tehran in 1953. Click to enlarge (Photo: Wikimedia Commons)

Segev and other Israeli officials worried that the same would soon happen in Gaza, but because of the tensions in the region at the time, they were reluctant to speak out, fearing they would be accused of being enemies of Islam.

So Segev said nothing. In 1984, Israeli intelligence got word that Yassin’s group was stockpiling weapons in a Gaza mosque. They raided the mosque and arrested Yassin, who claimed the weapons were meant for use against secular Palestinian groups like the PLO, not for use against Israel.

He was released from jail a year later, and continued to spread Mujama al-Islamiya’s influence in Gaza. Then, in 1987, he and six other Palestinians established Hamas as an offshoot of the Muslim Brotherhood.

The first leaflet they distributed blamed Israeli intelligence for undermining the social fabric of young Palestinians in order to recruit Palestinian “collaborators”. But despite this harsh language, Israel continued to focus on the Fatah party and the PLO, even meeting with senior Hamas officials as part of “regular consultations” that they held with Palestinian officials not linked to the PLO.

Mahmoud Zahar was one of the Hamas leaders who met with Israeli officials in the early days of the organization’s existence (Photo: AFP)

It wasn’t until Hamas kidnapped and murdered two Israeli soldiers in 1989 that Israel started to pay attention to the group. In response to the kidnappings, the Israeli Defense Forces (IDF) arrested Yassin and deported 400 Hamas activists to an Israeli-occupied region of South Lebanon.

During its time in South Lebanon in the early 90s, Hamas built a relationship with the Lebanese jihadist group Hezbollah and established its military division, the al-Qassam Brigades.

Throughout the early 90s, the al-Qassam Brigades carried out numerous attacks and suicide bombings on Israel. However, Hamas was centered in Lebanon and Jordan at the time, making it hard for Israel to eliminate them.

In 1993, Israel and the PLO agreed to the Oslo Accords, which established the Palestinian Authority as a governmental body to represent the Palestinians. This helped stem some of the violence in the region in the early 90s.

Then, in 1997, a failed Israeli assassination attempt on a Hamas leader in Jordan (and the resulting political fallout) led to the release of Hamas leader Sheikh Ahmed Yassin, who had been given a life sentence for the murders of the Israeli soldiers in 1989.

2000 brought about a renewal of the bloody conflict, with a surge in Hamas suicide bombings prompted by the growing number of Israeli settlements in the Palestinian-controlled territory of the West Bank.

In 2004, Yassin offered a military truce to Israel, asking for the establishment of a Palestinian state in Gaza, the West Bank and East Jerusalem in exchange. Israel turned down the truce, and Yassin was killed by a targeted air strike two months later.

In 2006, Hamas became entrenched in the Palestinian government. Though the group had boycotted the Palestinian presidential election a year before, they decided to take part in the legislative elections in 2006. They did remarkably well, wining 76 of the 132 available seats (Fatah won 43).

The relationship between Hamas and Fatah has always been rocky. Skirmishes have broken out between the two factions on countless occasions. At one point, Israeli intelligence even informed Fatah leader Mahmoud Abbas that Hamas was planning to assassinate him.

Despite their past differences, however, Abbas announced in March of 2012 that Fatah and Hamas were on the same page. He told Al-Jazeera,

“We agreed that the period of calm would be not only in the Gaza Strip, but also in the West Bank… We also agreed on a peaceful popular resistance [against Israel], the establishment of a Palestinian state along the 1967 borders and that the peace talks would continue if Israel halted settlement construction and accepted our conditions.”

But this declaration of unity is seeming pretty hollow now.

Mahmoud Abbas and Fatah have proposed a number of ceasefires between Israel and Palestine during this latest flare-up of the conflict, but Hamas has refused the deals, demanding that Israel move its citizens out of settlements in Palestine if they want a ceasefire.

One of the reasons that Hamas was able to gain so much political power in the mid-2000s was that Palestinians had become fed up with the corruption of the Palestinian Authority (led by the Fatah party) by the time the 2006 elections rolled around.

Unfortunately, the added political power that Hamas gained when they took over Palestinian politics that year led to the same corruption that the Palestinian people had tried to get rid of by voting the Palestinian Authority out of power.

Dorothy Peskin is an Israeli analyst who recently released a detailed report about Hamas corruption in Gaza. She put it this way:

“With multi-million land deals, luxury villas and black market fuel from Egypt, Gaza’s (Hamas) rulers made billions while the rest of the population struggles with a 39 percent poverty level and 40 percent unemployment.”

The average Hamas fighter today may truly believe in the Palestinian liberation cause, but power and influence almost always lead to corruption.

In my opinion, the leaders of Hamas have shown that they are more interested in maintaining their own power, influence and wealth than in actually helping the Palestinian people. Their strategy of maximizing civilian casualties by firing rockets from heavily-populated areas is just one example.

However, we must also recognize that Israel played a big role in establishing Hamas in the first place because of their fear of the secular Palestinian Liberation Organization.

“Many in the West Bank believe that Israel actively supports Hamas, in its effort to split the Palestinian nation and weaken the Intifada.”

The document also notes that although Israel was arresting a number of Palestinians at the time, very few were members of Hamas. The document went so far as to say,

“We believe that not only does Israel turn a blind eye on Hamas activity, but even supports it.”

You reap what you sow. There are countless examples of countries supporting groups that end up coming back to haunt them (the U.S.-trained mujahideen are a good example).

The bottom line is that there are no clear cut good guys or bad guys in this conflict, just lots of historical wounds that are still festering today. My only hope is that this brief history helped you make a little more sense of it all.