Home
Everything Else
Did You Know… Muhammad Wrote A Letter Guaranteeing the Protection of Christians?

Muhammad, the prophet of Islam, lived from 570-632 AD. Muslims believe that he is the final prophet of the monotheistic Abrahamic tradition, which includes Adam, Noah, Abraham, Moses, and Jesus.

So although it may come as a shock to many, it’s really not that surprising that Muhammad frequently visited the Christian monks of Saint Catherine’s Monastery on Mt. Sinai in the Sinai peninsula of Egypt.

For those who aren’t aware, Mt. Sinai is the mountain that Moses climbed to retrieve the 10 Commandments in the Exodus chapter of the Bible. 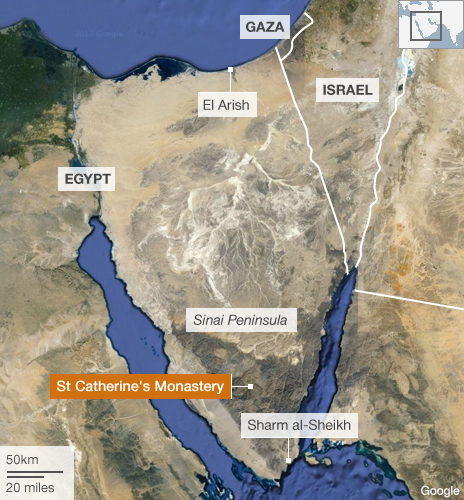 St. Catherine’s Monastery and the Sinai peninsula. Click to enlarge (Courtesy of BBC)

Muhammad had a great relationship with the monks, engaging them in discussions about science, philosophy and spirituality, among other topics. Their teachings had a great influence on the Muslim prophet.

In the year 622, Muhammad fled his hometown of Mecca in Saudi Arabia after hearing of an assassination attempt on his life. He and his followers (who left the city with him) settled in the city of Medina, where they officially established the religion of Islam. This pilgrimage is known in Islamic tradition as the Hijra.

In the letter, Muhammad made it known to his followers that Christians had the right to freedom of religion and movement within Muslim communities.

He decreed that they had the freedom to appoint their own judges and handle their own property, as well as exempting them from any taxes mandated by Islam or an Islamic government:

“They [Christians] must not give anything of their income but that which pleases them—they must not be offended, or disturbed, or coerced or compelled. Their judges should not be changed or prevented from accomplishing their offices, nor the monks disturbed in exercising their religious order…

No taxes or tithes should be received from those who devote themselves to the worship of God in the mountains, or from those who cultivate the Holy Lands.” A copy of the Achtiname from the 16th century. Click to enlarge (Photo: Wikimedia Commons)

He also told his followers that Christians would be exempt from any mandatory military service in a Muslim community, adding that the Muslims in that community still had a duty to protect them and fight for them in times of war:

“They shall not be imposed upon by anyone to undertake a journey, or to be forced to go to wars or to carry arms; for the Islams have to fight for them,”

and he declared Christian churches to be sacred places that should never be desecrated:

“No one is allowed to plunder the pilgrims, or destroy or spoil any of their churches, or houses of worship, or take any of the things contained within these houses and bring it to the houses of Islam.

And he who takes away anything therefrom, will be one who has corrupted the oath of God, and, in truth, disobeyed His Messenger.” Muhammad prefaced the letter by saying that its message had been sent, “to all the people as a trust on the part of God to all His creatures,” though he added that its contents were, “directed to the embracers of Islam.”

Then, in no uncertain terms, Muhammad described what he believed was a sacred spiritual relationship between Islam and Christianity:

“This letter contains the oath given unto them [the people of Islam], and he who disobeys that which is therein will be considered a disobeyer and a transgressor to that whereunto he is commanded.

He will be regarded as one who has corrupted the oath of God, disbelieved His Testament, rejected His Authority, despised His Religion, and made himself deserving of His Curse, whether he is a Sultan or any other believer of Islam.

Whenever monks, devotees and pilgrims gather together, whether in a mountain or valley, or den, or frequented place, or plain, or church, or in houses of worship, verily we are [at the] back of them and shall protect them, and their properties and their morals, by Myself, by My Friends and by My Assistants, for they are of My Subjects and under My Protection.”

Two modern-day monks sit and talk inside St. Catherine’s Monastery. The man on the left is a Bedouin server. Click to enlarge (Photo: Matthew D. Moyer)

The Achtiname pictured earlier in this post is not the original, but actually a copy of an original from the 16th century, which was likely already a somewhat altered version of the original text written by Muhammad in 626.

Dr. Aziz Suryal Atiya was a professor of Medieval History at Farouk University when he took part in The Monastery of St. Catherine and the Mount Sinai Expedition, a research project that looked into the history of the monastery and the authenticity of the Achtiname.

Here’s what he had to say:

“After the Arab conquest of Egypt in AD 640 , it was said that the Prophet Muhammad granted the monks of Mount Sinai a covenant whereby their lives and property became secure under Muslim rule. The existing tradition is that the original charter was taken from the Monastery by Sultan Selim I after the Ottoman conquest of Egypt in 1517. The Sultan, however, gave the monks a copy of it and sanctioned its terms.”

This timeline puts the emergence of Islam into some historical perspective. Click to enlarge

The copy now in the monastery is a copy of the certified copy given to them by the Sultan after he took the original in 1517 (supposedly for safe keeping at his palace in Constantinople, modern-day Istanbul), prompting some to question its authenticity entirely.

However, the basic premise of the letter seems to have been maintained over the years, despite any small changes that may have been made to it as it passed between different hands.

Either way, the fact that St. Catherine’s Monastery has lasted for nearly 1500 years, surviving through countless different rulers (both Christian and Muslim) and years of bitter religious conflicts in the Middle East, speaks volumes about the mutual respect of the faiths on this hallowed ground.

BONUS: St. Catherine’s actually includes a 12th century mosque within its walls, but it has never been used because it wasn’t built to face the Muslim holy city of Mecca in accordance with Islamic tradition.

EDIT (12/29/15): Some scholars believe that the Achtiname was forged by the monks of St. Catherine’s. While finding definitive scholarly sources for this claim is somewhat difficult, the issue has been discussed on multiple Reddit threads in the past.

The main argument in support of the forgery claim is that the style of the Arabic script (Ruq’ah script) doesn’t match the style that would have been employed during Muhammad’s time (Kufic script). However, as I pointed out earlier, the document we have today is a 16th century copy of the purported original, so it is possible that the copy was simply made using the more modern script.