Researchers in Britain have estimated that a tortoise named Jonathon is at least 182 years old, making him the oldest known land creature alive in the world today.

According to The Telegraph…

“Born in 1832 at the latest, he has plodded through two world wars and numerous revolutions, outlasting all his human companions. He was even photographed, looking rather elderly, with a prisoner during the Boer War, which ended in 1902.”

The tortoise was brought to his current home, the British territory of St. Helena in the South Atlantic, in 1882. At the time, Jonathon was estimated to be at least 50 years old (because he was already fully grown). 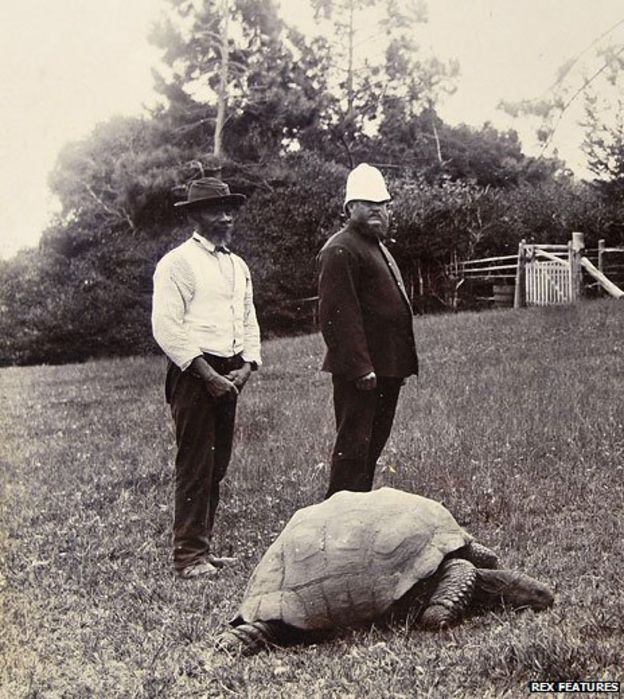 Researchers now calculate that Jonathon is at least 182 years old, but these are only conservative estimates, so he could actually be much older than that.

Jonathon currently lives at the British Governor’s residence on the island with four other giant tortoises. According to BBC…

“Jonathan is a rare Seychelles Giant. His lawn-fellows hail from the Aldabra Atoll in the Indian Ocean. Aldabra Giants number about 100,000, but only one small breeding population of Seychelles tortoises exists.”

On top of having a safe environment to live in and a few good tortoise friends, Jonathon’s diet is carefully regulated. A caretaker feeds Jonathon fresh vegetables on a weekly basis, and even massages Jonathon’s weakening neck to help with the feeding process.

At nearly two centuries old, it is no surprise that Jonathon’s vision and smell are limited, but his hearing is still strong, according to his caretaker.

Read more here at BBC or The Telegraph.

BONUS: Jonathon’s age of 182 years makes him older than more than half of the U.S. states.