A sea turtle who injured his beak in a boat propeller accident has just been fitted with a metal replacement jawbone that was crafted using a 3-D printer.

According to Fox News…

“Staff at the Research, Rescue and Rehabilitation center at Pamukkale University in Denizli, Turkey, nursed the injured 99-pound sea turtle back to health, but they realized the reptile would need a new beak if it was ever going to be self-sufficient at sea, as its jaws had been sheared off in the accident.”

The rescue team joined forces with a company called BTech Innovation to develop the prosthetic beak. The team took detailed scans of the turtle’s jaw to make sure the replacement beak would fit snug. 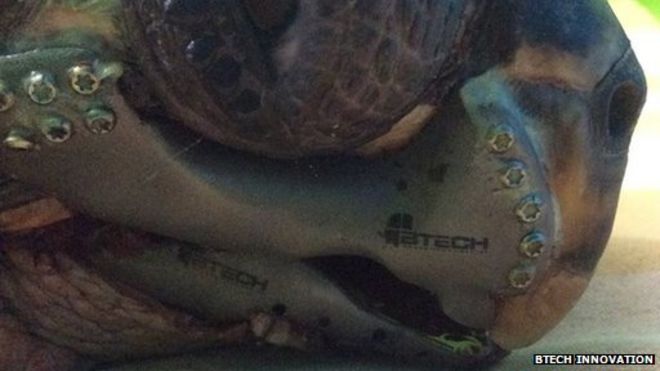 “The beak, made of medical-grade titanium, replaces the loggerhead turtle’s jaws, half of which were sheared off in the accident.”

Thanks to the surgery, the turtle (named “Akut-3”) is now able to eat on its own, giving it a fighting chance if and when it returns to the wild.

Right now a team is keeping an eye on Akut-3 to see if the creature will reject its new prosthetic. If everything goes well the turtle will return to the wild soon.